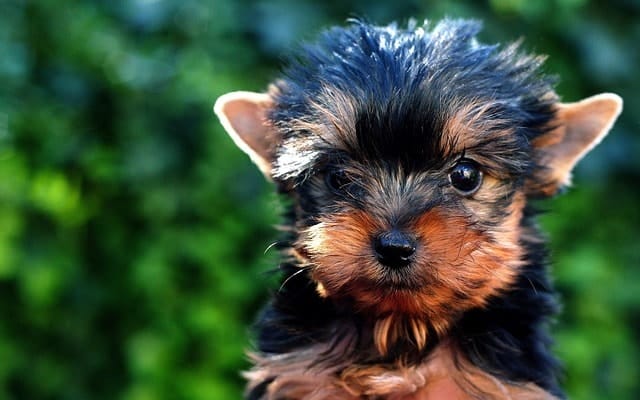 The Yorkshire Terrier, or Yorkie for short, is the most popular toy dog breed due to its affectionate personality and lively attitude. However, you may be wondering how smart these lap dogs can actually be.

So, are Yorkies smart? How smart are they? Yorkshire Terriers are highly intelligent dogs. According to canine psychologist Stanley Coren, Yorkies are “above average” intelligent dogs. And for working and obedience intelligence, they’re ranked the 34th smartest dog breed out of 138 qualifying breeds.

Though Yorkies are some of the best when it comes to obedience and learning, they are smart dogs in other ways. Let’s examine what actually makes Yorkies super smart toy dogs.

How We Measure a Yorkie’s Intelligence

As mentioned, there’s no denying that Yorkies are overall a very intelligent breed as evident in the rankings. But how did the experts come to this conclusion?

The smartest dog breeds list is largely credited to famed pHD and canine psychologist, Stanley Coren. He reached out to 199 North American obedience trial judges, who helped evaluate and rank dog breeds based on his criteria.

The criteria that Coren used for his research was met with a lot of criticism. Though it doesn’t tell the “full story” when measuring dog IQ, we think it’s a great starting point. Here’s what his criteria was based on:

Coren received a huge response from the trial judges – much larger than he had expected. However, not every dog breed qualified for his smartest dog breeds list.

Only dog breeds that received at least 100 evaluations were included in his final list. Fortunately, Yorkies are widely popular dogs and made the cut.

This meant that Yorkies were able to learn a new command with just 15 to 25 repetitions. You can probably teach your Yorkie a new command in an afternoon!

Not only are they quick learners, but also highly obedient dogs. Yorkies were able to obey a known command on the first try with a 70% or better success rate!

And if you’re curious, Yorkies are in the same intelligence class as Dalmatians, Samoyeds, Newfoundlands, Giant Schnauzers and Bearded Collies. Not bad company to be with.

Though Yorkies are really smart, there’s a significant difference between their obedience / working intelligence and the top 10. The top ten smartest dog breeds are conveniently in a class of their own.

The smartest dogs are able to learn a new command with just 5 repetitions or less! That’s at least three times faster than the Yorkshire Terrier.

What I find even more impressive is how obedient the smartest breeds are. They’re able to obey a known command on the first attempt with a 95% or higher success rate!

The smartest dog breeds happen to also be some of the most popular. They’re the Golden Retriever, German Shepherd, Poodle, Rottweiler, Doberman, Labrador and more.

Is Your Yorkie Intelligent?

Sometimes, to find answers to questions like these, it’s better to ask the people with the real-life experience. We’re talking about real Yorkshire Terrier owners.

So, we decided to survey the Yorkie Subreddit and Yorkie Talk to ask real owners this question. Here’s what they had to say to this question.

1. Irishhawk says Yes: “I think Yorkies are incredibly smart, intuitive dogs. My dog seems to be very good at observing my behavior and he can predict my next moves.“

2. Archie says Yes: “I find it scary just how smart these little yorkie dogs are. Living with Buddy is like having a room mate who bosses me around on a daily basis.“

3. Jenniferleigh says Yes: “I always knew Yorkies were smart, but it wasn’t until I had one that I realized how smart they really were.“

4. Mscat says Yes: “My Suzi responds to certain words which makes her understand what I am saying. I have heard that Yorkies are hard to train because they are strong willed. But, that does not mean that they are dumb.“

5. Deandarra says Yes: “My yorkie is far smarter than any dogs that i’ve owned…and i’ve owned a lot. Even compared to my lab, which is supposed to be way smarter.”

6. Jayreddmethod says Yes: “I’m not sure if my Yorkie is a genius…but training her for tricks/commands was the easiest thing ever. Potty training a little more difficult, but not bad at all.”

7. Katyyorkie says Yes: “Buster is very smart. He only needs to be asked one time to do something. Family and friends are amazed at the things he can do especially when is only asked one time.“

8. Jenncannm says Yes: “Pippa is one of the most intuitive yorkies i’ve ever met. She has a very high understanding of whats going on and is super obedient!“

9. Sierrapadre_ says Yes: “They don’t look it but they’re sneaky smart. When you least expect them to understand, they use it to take advantage of the situation! My Yorkies too smart for his own good.”

10. Jensencosmos says Yes: “My yorkie may be a little stubborn and strong willed, but in no scenario can I call her dumb. She’s very understanding on what’s happening, beyond just commands and tricks.“

Other Reasons Why Yorkies Are Smart Dogs

Yorkshire Terriers are regarded as some of the most intelligent dogs. But there’s so much more to dog IQ than just obedience and working intelligence.

What else makes Yorkies smart dogs? The fact that they excel in both instinctive and adaptive intelligence – the two other components of canine intelligence.

Instinctive intelligence refers the the innate ability or skill that was bred into the dog. What was the original intention for the dog breed? What were they bred for?

For example, Shelties are some of the best herding dogs in the world. The innate ability to round up sheep, guide them in formations and move them around, requires instinctive intelligence. They were not taught this, they just knew how.

On the other hand, Yorkies were originally bred to be be hunters. Yes you heard right. These dogs were bred to be ratters in mines because they’re small enough to reach into small crevices.

Additionally, Yorkies actually participated in actual hunts by burrowing underground to chase after badgers and foxes.

For example, one owner tells us a story:

Today was bath day and I gave Jewels her bath first. When I went to get Chachi, he was no where to be found. He was hiding because he knew he was next.

Clearly, this Yorkshire Terrier is able to learn from his previous experiences. Another owner explains how great at communicating his Yorkie is, saying:

When I accidentally close the inside door where Cooper can’t come in through the Doggie Door, he will go to the door and bark, and then come to us and bark.

The same owner tells us that his Yorkie will “bark at his food and water bowl when he is out of either.” He adds, “I know he has a million human words that he just wishes he could speak.“

These are just a few stories of how intuitive and adaptable these dogs can be. Ask any Yorkie owner and you’ll surely hear the same kind of stories.

Smart dogs aren’t for everybody. In fact, some owners suggest that it’s “easier” to raise a less intelligent dog. Much of this is because smart dog breeds need a lot of mental stimulation, Yorkie included.

Without enough mental stimulation, it could potentially lead to some destructive behavior. While Yorkies may not be able to do much damage, it’s still essential to provide them with their needs.

Unfortunately, not all owners have the time or energy to provide this for their smart dogs. However, a great way to help out is to provide smart toys and dog puzzles for your Yorkie.

Smart toys and puzzles will keep your dogs entertained as they try to “figure out” the toy. As long as you’re supervising or they’re in a crate, it’ll let you catch your breath. Here are some of my favorites.

The Outward Hound Interactive Plush Toy is fantastic for Yorkies. My miniature Aussie absolutely loves this. Plus, it’s a really cute plush toy. It’s a hide and seek toy where the dog has to figure out how to take out the squirrels.

If you want this, make sure to get a small size for your Yorkie. It’s one of the highest rated dog toys on Amazon for a reason.

Another fantastic dog puzzle that my dogs and I love is the Nina Ottosson Dog Puzzle. It’s highly interactive and requires your Yorkie to move away / slide parts to get to the treats! It’ll keep them entertained for quite a while.

I’d highly recommend checking it out at Amazon here. They have a few different variations but I went with this one because it seemed a bit more challenging.

Finally, I recommend the StarMark Bob-A-Lot. Hide your treats (or kibbles) in there and watch as your Yorkie learns to bob the toy in a certain direction.

Not only can it keep your Yorkie mentally active, but it’s also has a dual chamber for both kibbles and treats! Make sure to get a small size at Amazon.

When you’re debating whether to bring back a Yorkie, don’t make your decision based on how intelligent they are. Instead of picking dogs by intelligence, you should be picking them based on temperaments.

Does the dog fit your needs and personality? Yorkies are the ultimate companion and lapdogs. Though small, they have a huge personality. Bring one home and you won’t regret it!